This is a sturdy CITY MAIN FIRE DEPARTMENT SIGN - RED BACKGROUND WITH WHITE LETTERS (MATERIAL IS STURDY ALUMINUM; size is 12'' x 16'') WITH ONE HOLE IN EACH CORNER. The thickness of the sign is 0.02''. This CONTROL VALVE sign is required by the Fire Department and is made from a type of ALUMINUM, which is exceptionally sturdy. The sign is for both indoor and outdoor use.

Install a SPRINKLER AND STANDPIPE CITY MAIN CONTROL VALVE sign to stay compliant with the relevant laws, regulations and recommendations in force in NYC. Maintain the safety levels required by different federal and municipal agencies and institutions that observe and enforce the law.

Our SPRINKLER AND STANDPIPE CITY MAIN CONTROL VALVE signage comes with four pre- drill holes, which allow you to either use screws and install sign on walls behind relevant equipment or use Jack Chain/Sturdy Wire and install sign on the equipment it refers to, in which case you can simply hang sign where it belongs.

What is a standpipe system used for?

What is the purpose of a standpipe system?

A Standpipe is a type of rigid water piping which is built into multi-story buildings in a vertical position, to which fire hoses can be connected, allowing manual application of water to the fire. Within buildings standpipes thus serve the same purpose as fire hydrants.

What is the advantage of a dry standpipe system?

(Generally speaking, most buildings over 10,000 square feet must be fully sprinkled.) In summary, if a building is required to be equipped with a fully automatic sprinkler system, and it is more than 30 feet from surrounding grade to the highest or lowest story, a Class I standpipe system is likely required.

Why is it called a standpipe?

Standpipe may refer to: Standpipe (firefighting), a rigid vertical or horizontal pipe to which fire hoses can be connected. ... Standpipe water towers, used in the late 19th century. Standpipe (plumbing), a vertical pipe attached to a p-trap for rapid high-volume wastewater drainage such as from washing machines.

How many classes of standpipe systems are there?

The Three Types of Standpipe Systems. Class I Systems [2-1/2" (64mm) hose connections] are provided for use by fire departments and those trained in handling heavy water streams.

What is a standpipe drain?

The proper way to drain a washing machine isn't to hook the hose over the edge of a utility sink, as many homeowners do, but to install a standpipe and secure it to the wall framing. A standpipe is a vertical length of 2-inch drain pipe connected to a P-trap which is in turn connected to a drain

How many basic types of standpipe systems are there?

The specific type of system is based on the occupancy classification and building height. Standpipes have three major classifications: Class I standpipes serve a 2.5-inch fire hose connection for fire department use.

What is a Class 1 standpipe?

What is a standpipe valve?

Firefighters need reliable supplies of water to effectively extinguish fires. ... Code requirements were enacted, and the use of standpipe systems – a series of pipe designed to provide water for hose lines in strategic locations within a structure – and their outlets, the fire department angle hose valve, were mandated.

What is a combination standpipe?

A combined system consists both of sprinkler piping and is a standpipe for the building. Combined systems are the usual choice by building owners and contractors because their dual purpose is sensible, safe, and economical.

The minimum pressure while flowing the required standpipe flow (500 gpm from the hydraulically most remote standpipe and 250 gpm from each additional standpipe, up to a maximum of 1000 gpm for a fully sprinklered building) shall be 75 psi at any valve outlet while flowing 250 gpm through each valve

What is a standpipe test?

A standpipe is the vertical piping that connects fire sprinkler systems and hose stations between multiple floors. It is common to see standpipes in stairwells of high-rise buildings. A rooftop standpipe test verifies the water supply, pump and piping at the topmost part of the system.

How does a standpipe work?

In North America, a standpipe is a type of rigid water piping which is built into multi-story buildings in a vertical position or bridges in a horizontal position, to which fire hoses can be connected, allowing manual application of water to the fire.

There are various types of fire systems. 4 of them are described below:

Dry Pipe Sprinkler system-Dry pipe sprinklers are similar to pre-action systems as they use pressurized air in the pipe which exits before water escapes. This causes a minute delay in water discharge but is ideal for buildings with low temperatures so the pipes do not freeze. These fire sprinkler systems have a fast opening tool to get rid of the air and speed up the flow of water. Warehouses located in the north are a good example of what buildings should use dry pipe sprinklers.

Wet Pipe Sprinkler system-Wet pipe fire sprinklers constantly have water in them. This allows for a quick reaction to a fire and is the most common type of sprinkler installed in buildings. A type of building that uses the wet pipe system is a high-rise or office building with a few floors. This fire sprinkler system is cost efficient and low maintenance.

Pre-action fire sprinkler system-Pre-action fire sprinkler systems are filled with air and water is allowed to pass through when the smoke alarm or detector goes off. This type of system requires two triggers to start water flow. It helps greatly that the pre-action fire sprinkler can be set to prevent water from spouting in case of a false alarm or a mechanical failure. The pre-action system is good for use in places where the sprinklers are only necessary when there is an actual fire so other items in the building do not get water damage from an accidental sprinkling. Such buildings include libraries and data centers. These places contain items of high value like electronics and goods damageable by water such as books

Automatic Sprinkler control valve signs – These signs are designed to inform the fire department of the location and designation of the valve of the flow of water from mainline to each zone.

Our Shipping is fixed whether you buy 1 item or 20 items (We ship within USA only) - do not miss this opportunity to buy all signs needed at no additional shipping cost.

We are required to collect sales tax on any product sold on this site and shipped to an address in New York. The sales tax is 8.875 percent.

The requirements for sign content are determined by intended use and by applicable regulation. The BUYER is responsible for determining the appropriate content for a sign or package of signs.  HPDSigns.com makes no warranty or representation of suitability of a sign for any specific application. IT IS THE CUSTOMER'S RESPONSIBILITY TO ENSURE THAT THE SIGNS THE CUSTOMER ORDERS ARE IN COMPLIANCE WITH ALL STATE, FEDERAL, LOCAL, AND MUNICIPAL LAWS. Please review terms and conditions prior to purchase.

For more information about what is required, see the laws that are referenced and the rules applicable to your city and state. This page is for informational purposes only and is not intended as legal advice, professional advice or a statement of law. You may wish to consult with an attorney. 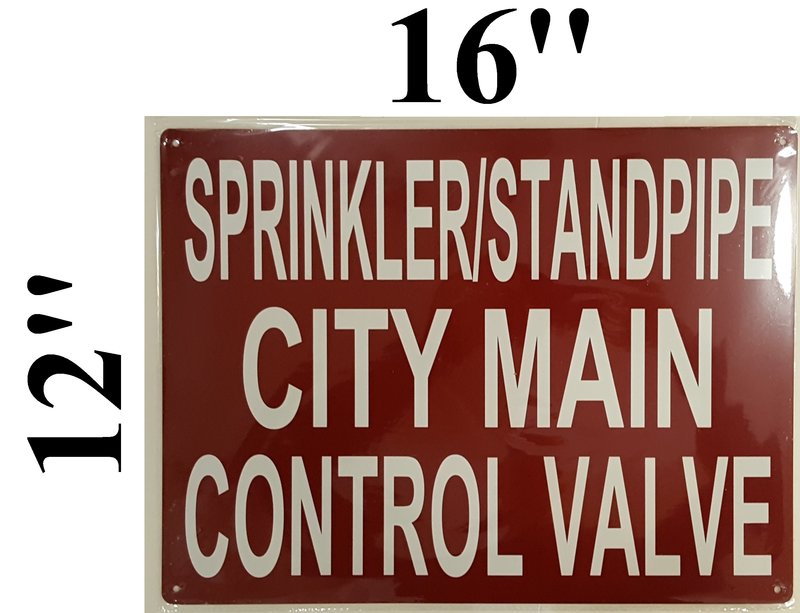 This is an aluminum “CITY MAIN CONTROL SPRINKLER AND STANDPIPE VALVE” SIGN with holes for HEAVY DUTY installation. In NYC use/post sign to inform tenants/owners/guests/officers of standpipe and sprinkler control main city valve in facility with proper HPD designation and aluminum signs

**Compromised sites are legitimate sites that are hacked to include content from attack sites.